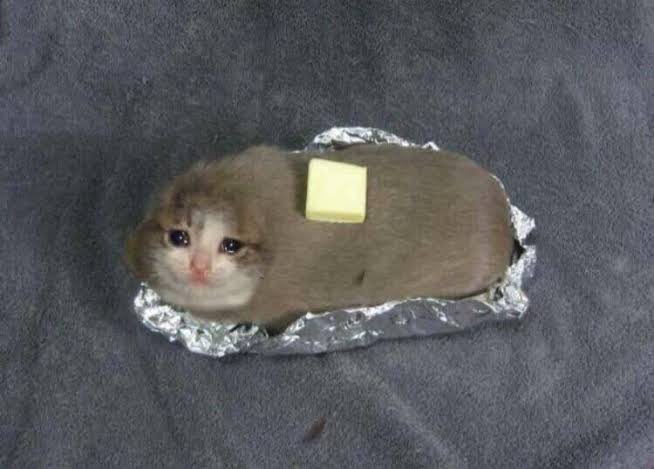 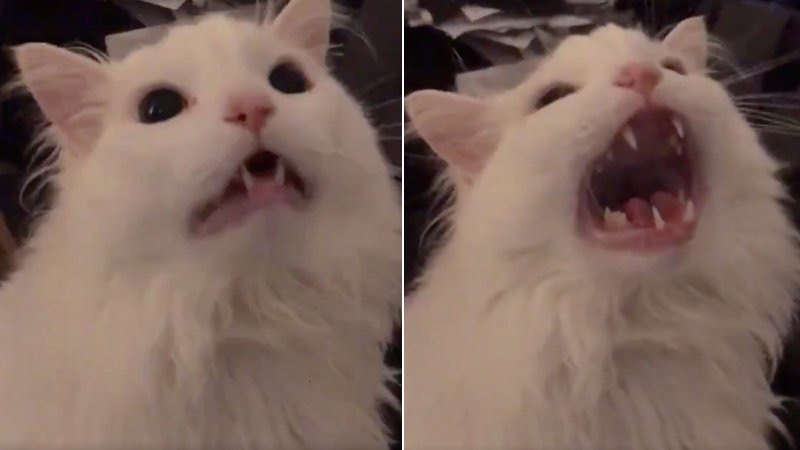 The first image is a variation of the “Sad Cat” meme. The face of the sad cat is photoshopped onto an existing image of a guinea pig forced to dress up as a baked potato, complete with the square of butter on it. This meme is one of my favorites because of the intense emotional distress that is presented. The image of the guinea pig is not necessarily funny on its own, the pig has a blank expression on its face and it seems to have accepted its fate. The addition of the sad cat face, an already heavily edited image makes the situation goofy. The sad cat face on its own tells the reader “I am so cute and sad. Why is life this way?” The image in its entirety tells me “I know I am a cute potato but please don’t eat me./ Why must you put me in this ridiculous situation?” The situation can relate to when humans ‘terrorize’ their dogs or cats with cute costumes.

The content is a combination of two images, one silly but neutral, and the other of a heavily edited image of a cat's emotional face made to look humanlike.The meme takes form as an edited image of a guinea pig sitting in aluminum foil with butter on a blank background. The stance of the meme depends heavily in the context that it is used in. Oftentimes the images of the sad cat are used as reaction images, using them as a form of expression. “Like form and content, stance is potentially memetic; when re-creating a text, users can decide to imitate a certain position that they find appealing or use an utterly different discursive orientation.” (Shifman,367) The sad cat potato meme I have chosen is more obscure, and often circles the internet in group chats instead of public platforms.

The second image is of a cat named Thurston Waffles, a white enthusiastic cat. The meme has been on the top of my list ever since it came out during the Vine age (2013-2017). The image series originates from a video, where Waffles continuously meows loudly at their owner, demanding to go on a walk. The owner asks in the first frame “Oh, you will just keep making that sound...really” “MEOW” “...until daddy’s head explodes?” “MEOW” Link to Instagram Video.

I find the video funny because something about the appearance of the cat in combination of the loud uncontrollable meowing appeals to me on a deeper level. This cat has so much emotion that the best way they can express it is tilting their head back and meowing with extreme force.

The content in the images expresses a cat’s reaction to an opinion. Although the images do not hold context about what is happening, there are always the universal ideas that people transport throughout the internet. “...memes are idea complexes and meme vehicles, their tangible expressions.” (Shifman,366) The form of the meme takes place as two still images of the same white cat. Instead of the original video, the meme has morphed into a simpler format to share it as. The stance continues to change as the context the meme is used changes.

The two cat memes are completely different when it comes to origin stories, however they do still relate to each other on a higher level. The two memes are not interchangeable when it comes to context, however they relate in the sense that they have become popular forms of expression or quick reactions. The memes are so popular because there are a lot of cat lovers on the internet. Popularity in memes is an important part of its lifespan, because the more people spread the meme, the higher amount of variations of the meme are created. “Copies become, in this sense, more important than the ‘‘original’” (Shifman,373).